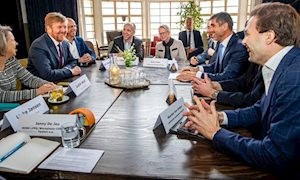 King Willem-Alexander and State Secretary Paul Blokhuis of Health, Welfare and Sport (Ministry of VWS) paid a working visit to Weert on 21 January in the context of shelter for the homeless and day care. During his visit, including a visit to small-scale shelters in the neighborhood where the needs of homeless people are put central, the King and State Secretary spoke with Judith Wolf, professor of Social care at the Primary Care Department, among others.

Judith (left in the photo): “The central issue was the question of the causes of the doubling, to nearly 40,000 people last year, of the number of homeless people in the Netherlands in the last ten years. And what needs to happen to turn this tide”. During the interview, various issues such as the housing shortage and the continuing impact of the financial crisis were discussed. Judith: “It is important to look at the structural factors, but also to look into the lives of people at risk factors and life events that make them fall behind and excluded with an increasing risk of homelessness. I am thinking, for example, of divorce or the death of a neighbor, domestic violence, financial problems and debts, loss of work and health problems.

The visit of the King and Secretary of State was part of a series of working visits during which the King was shown how an important part of the policy of the minister works out in practice. Judith: “I have argued that primary health care such as general practitioners and district nurses, and also hospitals (such as emergency aid!) should be given a greater role in identifying risks of homelessness. In our Radboudumc, as well, we can be more alert to this and start working with those signals to help people at the earliest possible stage. “